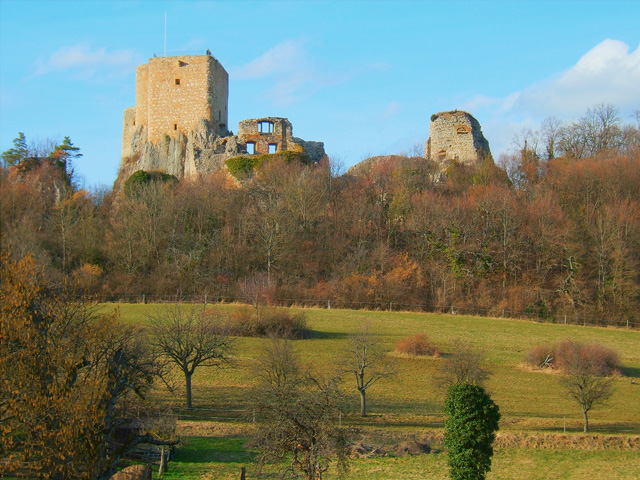 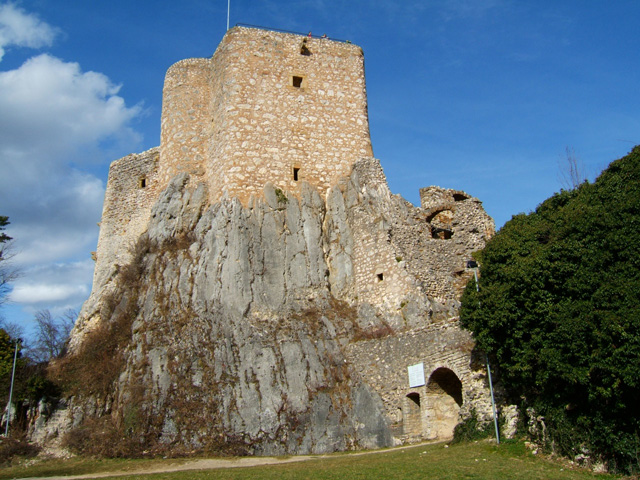 Location: Leymen, in the Haut-Rhin departement of France (Alsace Region).
Built: Extant in 1297.
Condition: Ruins partly restored.
Ownership / Access: Association for the Protection of Landskron Castle.
ISMH Reference Number: PA00085505
Notes: The Chateau de Landskron (or Landskron Castle) is situated in the southern part of Alsace, in the east of France, a few footsteps away from Switzerland, in the commune of Leymen. The village situated at the north of the ruin, Leymen, in the departement of Haut-Rhin, lies in France while Flüh, at the south east foot of the ruin, is in Switzerland. The castle was built before 1297. Several disputes concerning the ownership have been reported. It was widely extended in 1516. After 1665 Vauban rebuilt the fortress, converting the keep to a state prison for political prisoners and for the mentally ill. Bernard Duvergez a courtier at the French court, was held there from 1769 until 1790 when he was discovered by revolutionaries looking for political prisoners. He died while waiting for them to find him a better place. He is the subject of a local romance: The prisoner of Landskron The castle survived the revolution, whereas the houses of the rich in Leyman were burnt. The castle was destroyed in 1813 by the Austrian and the Bavarian armies fighting against Napoléon Bonaparte. After that time it was a ruin. In the 1970s, the former owners installed a colony of monkeys into the ruins. Since 1984, the castle has belonged to the Association pour la Sauvegarde du Château de Landskron (Association for the Protection of Landskron Castle) and was partly restored in 1996. Further restoration work is planned. One of the main characteristics of the castle is its big rectangular tower or keep. The Chateau de Landskron has been classed as a monument historique by the French Ministry of Culture since 1923.

How To Get To Chateau de Landskron (Map):