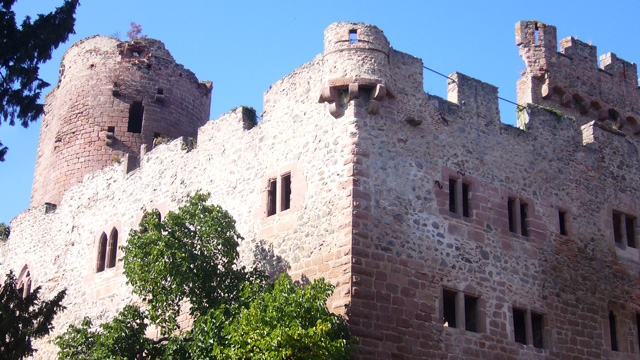 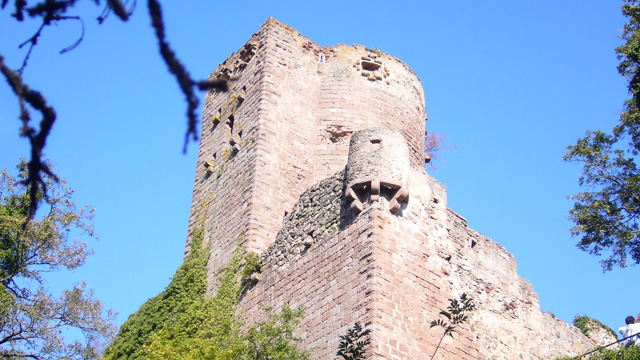 Location: Kintzheim, in the Bas-Rhin departement of France (Alsace Region).
Built: 12th century, possibly on site of 8th c.
Condition: Ruins.
Ownership / Access: Now a major falconry center. Open to public.
ISMH Reference Number: PA00084757
Notes: The Chateau de Kintzheim is a castle in the commune of Kintzheim in the Bas-Rhin departement of France dating from the 12th century. The ruin of the castle dominate the village of Kintzheim.Kintzheim was known in the 6th century under the name of Regis Villa. The Merovingian kings had made it into the center of a vast domain including the valley of the Liepvre River and the forests of Haut-Koenigsbourg.During the 19th century, the romantic movement brought medieval castles back into style. Many castles in France were restored by Viollet-le-Duc while in Germany Bodo Ebhardt restored many castles, including the castle of Haut-Koenigsbourg, inaugurated by the Emperor William II of Germany in 1908. In 1876, German architects carried out a consolidation of the ruins of Kintzheim. Since 1968, the castle features "La volerie des aigles" (Eng: The Eagles' Nest), which presents species of predatory birds, such as eagles, falcons and vultures, which are in danger of extinction. Spectators can attend daily flights of the birds.