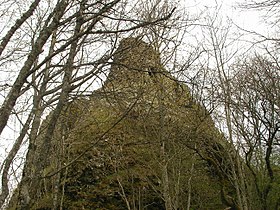 Location: Goldbach-Altenbach, in the Haut-Rhin departement of France (Alsace Region).
Built: --.
Condition: --.
Ownership / Access: --.
Notes: The castle of Freundstein is a historical monument located in Goldbach-Altenbach, in the French department of Haut-Rhin. It is a highlight, much appreciated by hikers. Nearby is the Freundstein Farmhouse.The castle was built in the second half of the 13th century with the peculiarity of belonging to two suzerains, the abbey of Murbach and the bishop of Strasbourg. It is said that in 1927 the castle was offered as a fief to the family of Waldner von Freundstein, to which it still belongs today, although a ruin (remains of a dungeon which also served as a dwelling, Damaged and perilous access), abandoned and whose destination was changed many times during the course of history. Its condition has gradually deteriorated since the beginning of the fourteenth century, and has seriously deteriorated following the 1356 earthquake in Basel. In 1457 Waldner of Freundstein bought the castle of Weckenthal (located at the extreme south of the bank of Berrwiller) to the Nobles of Wattwiller. Sixteen years later, in 1473, the Soultzians at war with the Waldners plundered the village of Berrwiller and Besieged the castle of Weckenthal, but failed to get in. In 1490, the same Soultziens ransacked Freundstein castle, property of the Waldner.This second wave of the looting of the Castle intervenes after that of the Mulhousiens in 1441 in conflict with the Family Waldner of Freundstein. In 1525 during the German Peasants' War, a fire caused by an uprising and siege by the rustics from the Sundgau (note: the peasants want to retain the "old right" transmitted orally and do not accept the Roman law that the Lords wished to introduce), ravaged the castle again, later the building will be destroyed by lightning in 1562. It was partially restored during the fourteenth century but was definitively abandoned at the beginning of the seventeenth century. Let us recall that the castle, facing the Vieil-Armand, not far from the front line, was converted from the end of 1915 into a military observatory by the French army during the Second World War. The building has been classified as historic monuments since 1922.

How To Get To Château de Freundstein (Map):