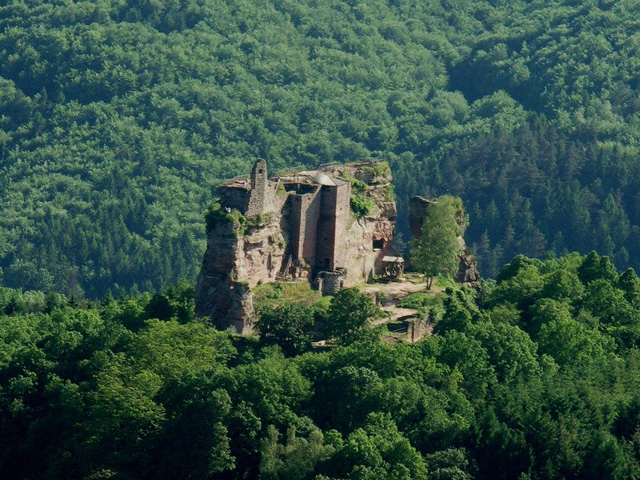 Location: Lembach, in the Bas-Rhin departement of France (Alsace Region).
Built: 12th century.
Condition: Ruins.
Ownership / Access: baron de Fleckenstein.
Notes: The castle of Fleckenstein is a castle semi-troglodyte which is located in the French town of Lembach, in the department of Bas-Rhin. It is the second most visited castle in Alsace - after that of Haut-Koenigsbourg. It has been classified as historic monuments since December 1898.The castle of Fleckenstein, attested in 1165 was built from the twelfth century, and this fief remained to the barons of Fleckenstein until 1720. In the sixteenth century the castle of Fleckenstein. It was divided between the two branches of the Fleckenstein. The arms of Frederick of Fleckenstein and those of his second wife, Catherine of Cronberg, adorn the staircase tower. It was part of a series of castles which monitored the link road between Bitche and Wissembourg. It was destroyed in 1689 by General Melac, commander of the troops of the Baron de Montclar under Louis XIV. The fief passes to the Vitzthum of Egersberget, in 1812 the ruins are bought by an individual, J.-L. Apffel, then it passes in 1812 to General Harty, baron of Pierrebourg, in 1919 to the State, then in 1958 to Lembach Tourist Office.

How To Get To Château de Fleckenstein (Map):